Showing posts from November, 2009
Show All

November 30, 2009
Rather humourous set of real phone calls between a comedian and a junk mailer.

What sort of place do I work at?

November 26, 2009
Last week, I came across the following notice in the male changing rooms at work: 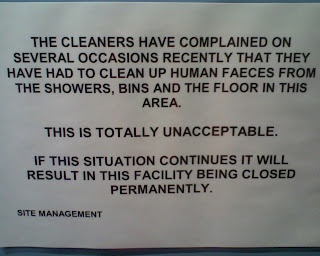 It seems to be a mighty bizarre thing to do and makes me wonder what sort of person would poo all over the place like that. I can't say that I have noticed any of the stuff lying around but it makes me feel slightly queasy just thinking about the number of times that I have used those showers. And how do they know it is human faeces?

This is not the first "poo" related incident either. Last year all the towels on the towel rack outside the changing rooms (including one of mine) had to be destroyed because someone had wiped poo on a few of them. Previous to the great towel burning there was an infamous incident where someone had pooed in a cleaner's mug. At least one person seems to be on a serious bowel-related rampage. I would of thought that because the demographic of the workforce are mainly highly educated people that this sort of thing wouldn't happen but hey there can always be a rotten apple. I will be mighty peeved if they close the changing rooms though as I deperately require a shower after my daily commute.

The site management seemed to be on a mission last week as this notice appeared outside the girls' toilets near my office: 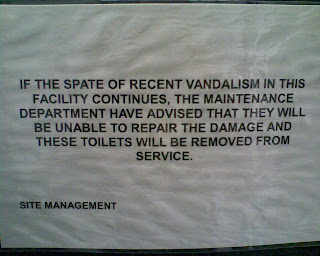 Makes me wonder what on earth the vandalism was and whether I should risk taking a peek.

The following notice appeared in the men's toilet near my office ages ago, after a few weeks where the toilets kept getting blocked: 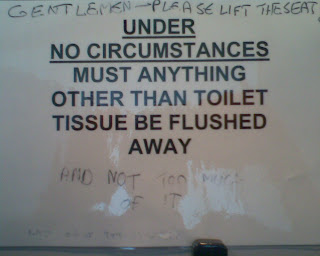 I think the bit at the bottom that is unclear says "What about the poo?"

Very funny but I think good old site management hadn't cleared the blockage correctly the first time and thats why it kept getting blocked.
Post a Comment
Read more

November 25, 2009
Splitting Time from Space—New Quantum Theory Topples Einstein's Spacetime: Scientific American: "Was Newton right and Einstein wrong? It seems that unzipping the fabric of spacetime and harking back to 19th-century notions of time could lead to a theory of quantum gravity."

Glad that people are continuing to come up with ideas for quantum gravity that avoid the over-parameterisation of string theory. I still like the sound of "Loop quantum gravity", I wonder how that is getting on.
Post a Comment
Read more

Plotting a correlation matrix with ggplot2 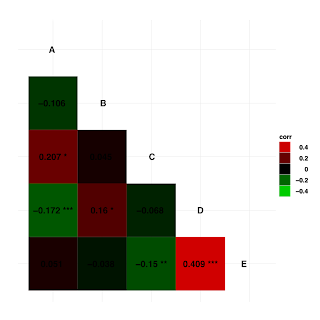 This is a decent description on a decent way to display the results of multpile correlations in R using ggplot2.
2 comments
Read more

November 20, 2009
Nationwide recently closed down the ability to get OFX statement files. These files were used to get transaction information into Microsoft Money and many other bits of accounting software. You can read more about it at the BetterOnlineBanking.co.uk website.

I needed to find a way round this so that I could continue using Gnucash without resorting to typing everything in. Looking around I notices that the QIF format was pretty simple and so I have written two scripts:

They are tested to work on both OS X and Linux and have zero requirements.

Lets hope that Nationwide sort themselves out and produce a better way to do this.

Both simple scripts are variations of each other to adjust for the different columns and are written in awk. I have never done anything in awk before so it is likely that it is not the most efficient, but it works and I did enjoy learnig the basics.

I just noticed that someone has produced a Nationwide to OFX converter which would also produce files that can be used in Gnucash etc.
1 comment
Read more

Trying to organise my library of PDF papers

November 19, 2009
I have recently been trying to find a better way to organise the library of papers I have got in the form of PDFs. I have tried two recently: Mendeley research networks and papers.

Papers is a superslick OS X application that I have trialled a couple of times. A few of my colleagues use it and it really is well designed and easy to use. What is especially powerful is that you can search for papers, download the pdf and have it put in your library all within the application. Another useful feature is that you can drag and drop pdfs into it and it will go out and get all the correct annotation information for you. It currently costs €29 or $42.

Mendeley is an application that I came across a couple of days ago and overall I am really impressed. The company describes itself as "Like iTunes for research papers." and it has got quite a bit of positive press lately.

Mendeley consists of a desktop application and a social web application. The desktop application is cross-platform and allows you to import pdfs, organise your papers into libraries etc. and annotate your pdfs. As with papers it can rename your pdfs based on the annotation information. The real magic though is in the web part of the product. You can sync your libraries (annotations and pdfs) to the web allowing for easy cross-device shared libraries but more importantly it allows you to set up libraries as shared with different users. It also will allow you to see researchers with similar interests and give you statistics about your library and even about papers that you have authored.

In addition there is also a web sciptlet which they call a web importer that allows you to import paper annotations directly from pubmed, web of knowledge etc.. Unfortunately this doesn't import the pdfs too, that has to be downloaded separately. Also there are plugins for word and openoffice so that you can cite and provide reference lists in your papers. Finally, for the latex fan boys it outputs to bibtex.

Rough comparison of Mendeley with papers

November 19, 2009
A paper has finally been published based on some of the work I did during my PhD. Really thrilled about it and in a top journal too. Thanks go to Martino for a lot of hard work.

Modern genomics technologies generate huge data sets creating a demand for systems level, experimentally verified, analysis techniques. We examined the transcriptional response to DNA damage in a human T cell line (MOLT4) using microarrays. By measuring both mRNA accumulation and degradation over a short time course, we were able to construct a mechanistic model of the transcriptional response. The model predicted three dominant transcriptional activity profiles—an early response controlled by NFkappaB and c-Jun, a delayed response controlled by p53, and a late response related to cell cycle re-entry. The method also identified, with defined confidence limits, the transcriptional targets associated with each activity. Experimental inhibition of NFkappaB, c-Jun and p53 confirmed that target predictions were accurate. Model predictions directly explained 70% of the 200 most significantly upregulated genes in the DNA-damage response. Genome-wide transcriptional modelling (GWTM) requires no prior knowledge of either transcription factors or their targets. GWTM is an economical and effective method for identifying the main transcriptional activators in a complex response and confidently predicting their targets.

Apple does not make the most important detail for integration between iPhoto and Facebook easy to find. In order for Faces tagged in iPhoto to correctly link to their corresponding profile(s) on Facebook, the email address for the contact in iPhoto must match the address on file in Facebook.

November 11, 2009
FastPorts is a precomplied set of unix applications that are compiled from the MacPorts project. Could be pretty useful as I use MacPorts at the moment to get all the necessary unix tools but get frustrated at how long it sometimes takes to compile them.
Post a Comment
Read more

November 11, 2009
This is just an interesting article I want to keep around.
Post a Comment
Read more

November 04, 2009
Ars Technica have started an interesting series on DNA sequencing. I will update this post as the new articles are published

November 04, 2009
This is a Google Picasa 3.5 review. Toying with the idea of switching from iphoto once my current version gets a bit dated. I really do dislike the way that iphoto organises your photos, but apart from that I like it.
Post a Comment
Read more