Showing posts from November, 2007
Show All

November 19, 2007
Backreaction: A Theoretically Simple Exception of Everything

This is an interesting new development in the theory of everything saga. Glad to see there might be a simple approach that avoids all this string theory stuff. Must say I am a bit concerned that it is 248 dimensions ... why do these things have to be so high.
Post a Comment
Read more

November 04, 2007
This is just a quick note on how I got windows running as a virtual machine within Linux. My situation was a bit peculiar because I could not re-install windows as it had a load of work specific stuff on it that It had set off that I
1) Did not have the rights to install
2) Did not want to hassle IT about (assuming that they would let me do it)

So the easiest and most successful approach was to use VMWARE's free products the key components being:
1) VMWARE converter
2) VMWARE player

It runs really well and I impressed that you can do this with just VMWARE's free stuff. The only thing that would be nice is if they had a free VMWARE player for OS X, but I suppose you can't have everything.

NB This approach is superior to dual booting as
1) I can do stuff on Windows and Linux at the same time
2) It saves me time
3) When I boot into Windows proper it does weird stuff to the boot loader that is a right pain.
Post a Comment
Read more 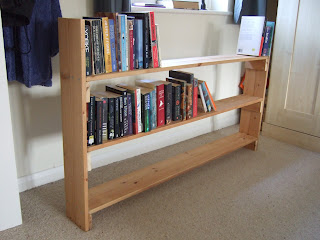 We had some bed slates left over from our old bed and a while ago I had decided that I wanted to use them to build a wide bookcase for the bedroom. So on Saturday morning with a bit of sawing, sweat and a lot of drilling/screwdriving Dan's special "bed" bookcase was born. It is a bit rough and ready, but I must say I am pretty proud of the result seeing that I am not the most talented in the DIY/crafty area.