Showing posts from May, 2005
Show All

May 30, 2005
I can't believe it. For months now crazy frog has been doing my head in appearing in every single advert break on every TV channel, but now ... now ... it has managed to get to number one in the charts. Man, I knew that the people that brought singles had no joke, but this is beyond a joke. I blame the kids ... where is your soul. 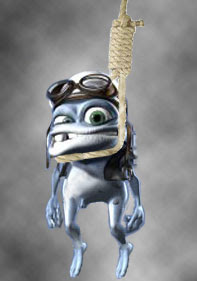 May 27, 2005
It is Friday and once again I have managed to get completely distracted. The fruits of my wasteful behaviour can be seen here. This is a news aggregrator that I have set up on my webserver using a php program called lilina. It was extremely simple to do. It came out of a conversation I had with Gav about how blogs might be a good way to keep up with people that have moved away from Thanet i.e. Planet Thanet. For those not in the know "Planet *" is a aggregator of blogs that are about *, for example Planet Mozilla. Anyway enough wasted time, back to work.
Post a Comment
Read more

I love the Guardian!

May 26, 2005
The Guardian is indeed a friend to the student. Not only can you get it for 20p from the student shop but today you got a free book as well. It is not a bad book either - H.G. Wells's The War of the Worlds. I hearby pledge loyalty to that mighty tome once I am making a decent wage. Actually, to be honest, I am not that commited, I only buy it on Thursdays and Fridays - Thursdays is great as it has the science and IT sections and Saturday would not be Saturday without The Guardian!
Post a Comment
Read more

May 26, 2005
Bah humbug! The world is collapsing around my head. If you hadn't guessed I am in my final year of PhD and so my money runs out in September. I am going something along the lines of computational biology. I am part of a project where I do all the maths and computing stuff but I am reliant on others produce decent data. For three years I have been trying to get decent protein data for the 4-5 key proteins of the network I am looking at. I found out today that basically the postdoc doing all the experiments will not have time to do my protein data. Boo hiss. So it will be very difficult to get far with the comparison between my models and real life. :(

It is a great shame, as the new method that the experimentalists have come up with seemed ideal to produce sharp quantifiable protein data. I have some Western blot data, but that is not great to quantify as large errors seem unavoidable. I do not blame my supervisor as I am sure he has tried his hardest to get the postdoc to do the work, but this postdoc is difficult and I have a feeling she never liked doing the protein stuff. Finally I am only a very minor part in the project so a lot of time there were bigger fish to fry. Just extremely frustrating that the only bit of data I needed will not be forth coming. BIG RANT OVER.
Post a Comment
Read more 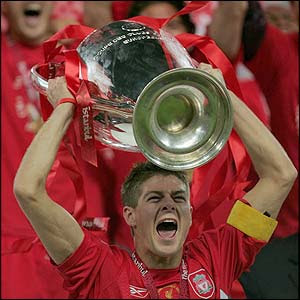 I do not use this blog to normally talk about football, but I just had to mention yesterdays match. What a brilliant game, what a brilliant result. I am not a Liverpool fan but I always support English teams in Europe, even if it is the likes of Man U (boo hiss). Even for the neutral this game was marvellous. AC Milan were up by 3 goals by half time, but Liverpool managed to pull it level and then win on penalties. Brilliant! We even got some Grobelar knee bending in the goal mouth.
Post a Comment
Read more

May 19, 2005
My fight against OS X continues. Arrrrrrrrggggggghhhhhh. I have tried a fresh new user account and still it destroys itself. I have currently turned off my SSH and Web server and I have survived for two hours now. Lets hpe and pray that it is something to do with one of those two. My hot favourite at the moment is that it is because I have "HostnameLookups" in in apache. The reason I suspect this is that the breakdown always starts with the network seeming to go down. Maybe it is the lookupd daemon being over used. If this is the problem I will either turn off "HostnameLookups" or set up my own nameserver.
Post a Comment
Read more

OS X Tiger keeps freezing on me. It seems that if I do too much activity at once then it just gets the spinning ball of death. I have checked everything but still the problems persist. I have now removed everything from startup and only run the bare minimum of activities, so far so good today. Maybe it has something to do with the Growl notification system ... that is my current suspect. The problem is it is a serious distraction from my work and time is ticking in a big big way on that front.

Well lets hope the problem has gone away and I can start reintroducing apps!
Post a Comment
Read more

May 18, 2005
So guess what, surprise surprise, there was problems with the new OS X install (actually upgrade would be a more accurate term). On the positive side, I sorted out Apache and OpenSSH simply by seeing the changes between the configuration files and then reimplementing the changes.

My mail server, postfix, though was a completely different matter. It took an almighty task to get it sorted. I used a combination of the following pages:

In the end, I had to change the launchd postfix configuration file, remove the postfix user, run the CreateSystemUsers script, run "sudo /etc/postfix/post-install set-permissions" and finally "sudo launchctl load /System/Library/LaunchDaemons/org.postfix.master.plist". Phew! I think it is working now though. I think the problem with the postfix user was that it was left over from some fink install, not sure how it got there though.
Post a Comment
Read more

May 18, 2005
OS X has a Unix underbelly, which means that with a bit of effort you can get most unix programs to run. This is essential to me and work. To make it easier there is a variety of package managers that sort everything out for you. Up until recently I had been using fink but I was growing frustrated at the number of programs that I wanted that were either in the unstable repository or not there at all. Because of this and the fact that I would have to start from scratch with OS X Tiger, I decided to have a look at the main contenders fink, DarwinPorts and Gentoo for Mac OS X.

Gentoo is a source based linux distribution that has an excellent package mangement system called portage. I use this on my computer at home and love it. Recently they have ported portage to Mac OS X.

DarwinPorts is based on the package systems used in the opensource BSDs. It has recently reached version 1.0.

Fink is based around the debian package system.

If the amount of packages were the same I would choose to use gentoo as it is a system that I know and like. Unfortunately, the amount of packages currently available are very few and a few important ones like imagemagick, aquaterm and urlview that I need are missing. It must be remembered that this is still a young project and so I will definitely be keeping my eye on this one.

DarwinPorts has about the same number of packages that I require as fink but they are different packages. So I have come to the conclusion that I will stick with fink despite its floors, but I will look into running DarwinPorts concurrently and keep an eye on Gentoo. In a way I would like to help with the Gentoo project but I just do not have time at the moment :(.
Post a Comment
Read more

May 18, 2005
Just a quickie to say that Alice and I have set up a new blog over at blogger to contain news and stuff rather than comment and computer stuff!

I must say that it took bloody ages to sort out the header, getting the picture on the right and the text on the left ... phew! In the end a bit of floating CSS sorted it out. Lets hope it looks ok in Microsoft Explorer.

Here is the code:

The above is a bit of a mess at the moment, but I will sort it out later when I can work out how to print html code verbatim.

May 17, 2005
I am installing Mac OS X tiger on my desktop machine at work. Hopefully this will go without a hitch but these things rarely do. I have backed up my website, home directory and the /etc so I should be able to recover everything.

May 17, 2005
After a week of tinkering I have finally got my PhD examination entry forms in. This has to be done about 4-6 months before you submit, so the clock is really ticking now. Must be motivated, must be motivated. The only other form to go in is the "Nomination of examiners" form which I releant on Mike for, lets hope he gets that done quick as a flash.
Post a Comment
Read more
More posts